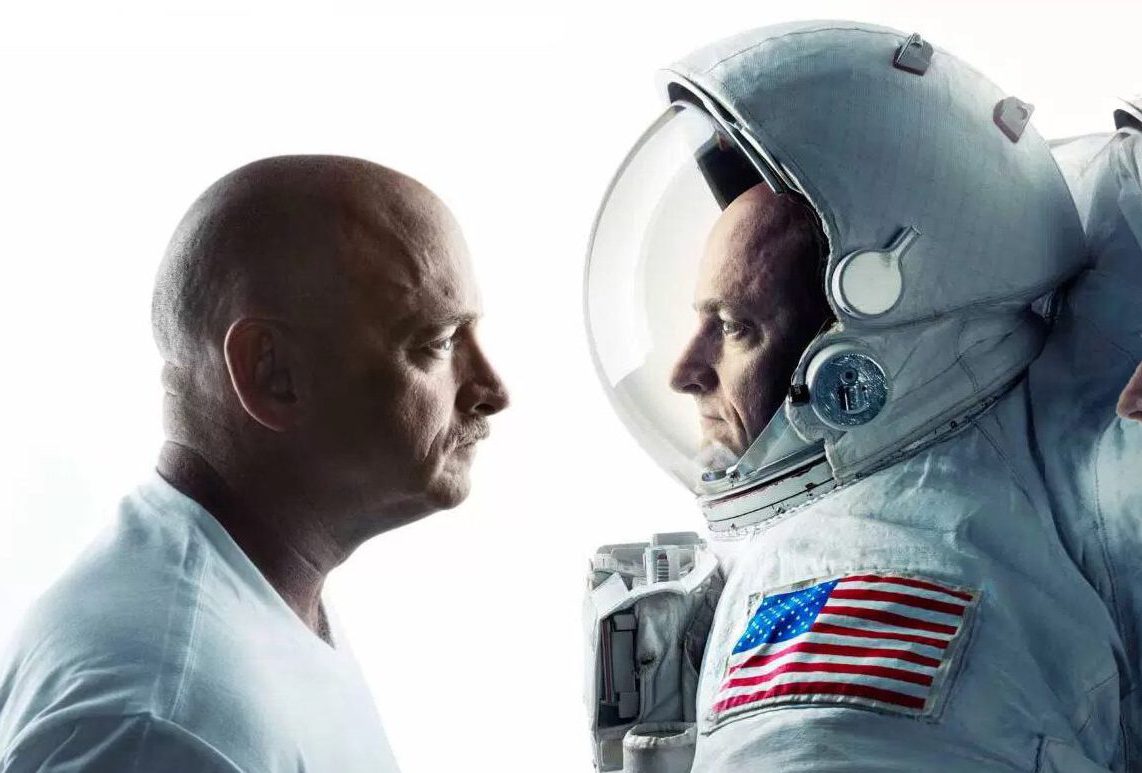 Seven hours. The drive from Kent in the South East of England to Yorkshire should have taken four. But such was the magnitude of the occasion that I had set off early. Astronauts Mark and Scott Kelly are the only siblings to have travelled in space with 4 spaceflights each and are NASA’s only set of identical twin astronauts, and I was meeting the twin ‘time travelling’ astronauts Mark and Scott Kelly that evening.

Scott Kelly, the slightly younger of the two by six minutes, had recently spent a year in space, and along with his twin Brother who had remained on Earth, had taken part in NASA’s ‘Twins Study’; which essentially consisted of a course of ten separate investigations that coordinated together and shared all data and analysis as one large, integrated research team to was conducted with identical twin astronauts Scott and Mark Kelly. These investigations provided a broader insight into the subtle effects and changes that may occur in spaceflight as compared to Earth by studying two individuals who have the same genetics, but are in different environments for one year. The goal was to help pave the way for future crewed missions to Mars, which will require long journeys through deep space.

Mark Kelly flew four space shuttle missions during his astronaut career: the STS-108 flight of Endeavour in 2001 to the International Space Station (ISS), the STS-121 mission of Discovery in 2006, serving as Commander  on the STS-124 flight of Discovery again in 2008 and again as Commander the STS-134 mission of Endeavour once more in 2011 (which was the second-to-last flight of the space shuttle program where I had been in attendance at John F. Kennedy Space Center in Florida when Endeavour landed for the final time).

Scott Kelly first flew on the STS-103 flight of the shuttle Discovery in 1999 on an update and servicing mission to the Hubble Telescope, and then again, this time as Commander on the STS-118 mission of Endeavour in 2007. He also stayed aboard the International Space Station (ISS) for long stints twice, from October 2010 through March 2011 serving as a Flight Engineer for ISS Expedition 25 and as the Commander of ISS Expedition 26. In March 2015, Kelly launched for a one-year mission to the ISS, serving as again a Flight Engineer for increments 43 and 44, and Commander for increments 45 and 46 of NASA’s ‘Twin Study’. The one-year ISS mission, which Kelly conducted with cosmonaut Mikhail Kornienko, marked the longest stretch anyone had ever lived continuously aboard the ISS.

I arrived at the 17th century hotel that was set in 20 acres of gardens and grounds in the beautiful Went Valley in West Yorkshire that was the venue of our meeting and subsequent gala dinner with 2 hours to spare. I was not alone as guests were beginning to congregate in the hotel’s lobby and bar before taking the opportunity to become acquainted with retried US Navy Captains Mark and Scott Kelly who were having photographs taken in a pop-up event studio with anyone who asked, and that’s when I saw it.

My photograph of the ISS transiting the Moon.

Let me explain; Earlier in the year it was announced that Mark and Scott Kelly were coming to the UK for this event in rather spectacular fashion…

…and in keeping with tradition with our hosts ‘Space Lectures’; I wanted to donate a photograph that was then going to be auctioned after the dinner. Challenge accepted. I set out to plan, test, and achieve a shot of the ISS transiting across the Moon. With Space Lectures’ Apollo legacy truly cemented with previous guests such as Jim Lovell, Charlie Duke, Tom Stafford, Fred Haise, Ken Mattingly, Buzz Aldrin, Alan Bean, and Edgar Mitchell, I felt a photograph of the ISS transiting across the Moon encapsulated both the history of the Apollo era and the modern era of space flight as when I came to shoot the photograph, Scott Kelly was indeed onboard the ISS. 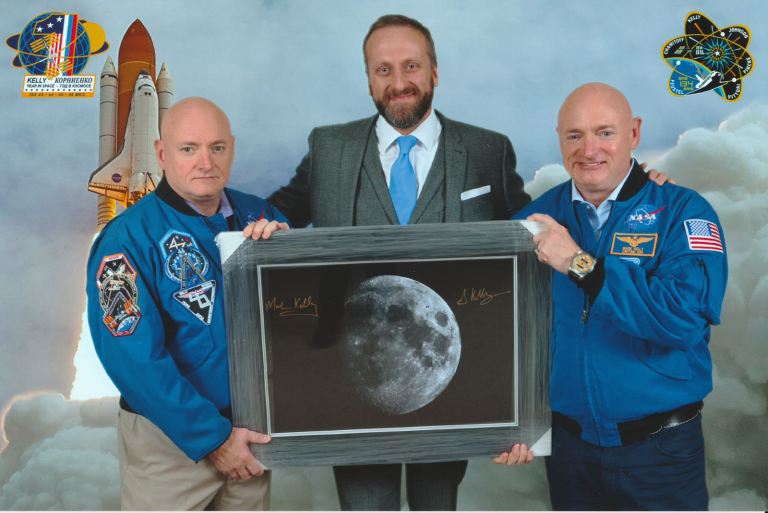 Shot through TWO Skywatcher Explorer 130P SynScan AZ GOTO 5.1in F/650 Computer controlled Newtons with parabolic mirrors; One built a mosaic of the moon using around 25 avi’s (each of which makes up around 100 frames), whilst the other shot the ISS transit at 6000/1 of a second.

The photograph was auctioned and sold for £500, the highest on the night!

Both Mark & Scott took the opportunity to mingle with the guests following dinner. Their presentation was slick, very informative and comical in equal measure; a polished double act to say the least. During the auction Scott insisted on bidding for an unsigned publishers proof copy of fellow astronaut Mike Massimino’s book “Spaceman”, and started the bidding at 50 cents. As his Brother Mark then accompanied Scott and began filming the stalled bidding, it was obvious to everyone that Mike Massimino was going to find the video on his phone the following morning. The book sold for £30.

From talking candidly about Great Britain’s recent Brexit referendum, Scottish Independence, and their own limited political ambitions, and playing golf with Barak Obama, both epitomised what could be achieved with hard work and perseverance. Scott offered closing message to the room:

“As I was undocking from the ISS for the last time, I was looking out my window and can see this truss of the ISS and was just contemplating the 500 days of my life that I’d spent on the ISS, how we’d built this million pound spaceship in low earth orbit, the hardest thing I believe we have ever done, an international partnership with 15 different countries, including my very good friend Tim Peake who I was on the ISS with, great guy, 15 countries, different languages, including Time Peake’s different language, different engineering standards, putting these modules together in orbit. Some of these modules had never been connected before on the ground, in a vacuum while flying around at 17500 mph in extremes of temperatures of plus and minus 270 degrees, and I just thought that this was the hardest this we have ever done, and if we can do this we can do anything. If we decide we want to go to Mars, we can go to Mars, if we decide we want to cure cancer, if we put the resources behind it, we can cure cancer, if we want to fix the problems with our environment with fiscal problems, political problems, I believe we can do it. We have challenges wherever you might work, you can fix those. We are true believers now that if you can dream it, you can do it, have a goal and a plan, take risks, be willing to make mistakes and work as a team because team work makes the dream work and you can choose to do the hard things and if we do that, then the sky is not the limit…”